Earth Under My Heel - The Book

On the 18th of March 2013 I set out, in fulfilment of childhood dreams, to walk the ancient pilgrim route called the Way of St.James or Camino de Santiago from Roncesvalles to Santiago de Compostela. Earth Under My Heel is my journal. 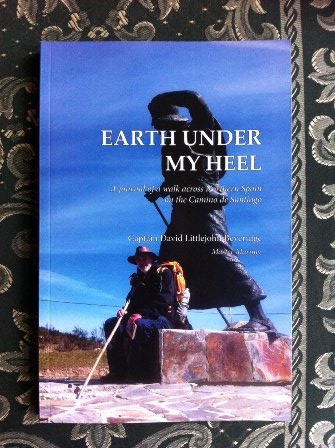 Synopsis by Dominic Brown
In the spring of 2013,Captain David Littlejohn Beveridge (author of Water Under the Keel) fulfilled his childhood ambition of walking the Camino de Santiago, one of Europe’s most important pilgrimage routes since medieval times. Accompanied part of the way by his son Joe, David walks the 790 kilometres through Spain’s northern provinces from Roncesvalles to Santiago de Compostela. The trek, no small undertaking for the 64-year old self-described “conservative evangelical”, is relived in David’s latest book Earth Under My Heel. Along the way, he encounters an international cast of characters with a diverse range of beliefs; together, they reinforce the idea that, irrespective of national or doctrinal differences, ordinary folk get on fine. Conversations with new friends are interspersed with the “comfortable silences” of contemplation and shared faith, alongside the exchange of philosophies and the kindness of strangers.

That a Scots Protestant would undertake an essentially Roman Catholic pilgrimage might raise some questions, and these are addressed with clarity. Long possessed of an intellectually generous interest in theology, David insightfully analyses the “pilgrimage as redemption “ tradition, affording the book and ecumenical feel; the inevitable contradictions are faced squarely, and the writer remains unshakable in his Lutheran ideal of salvation through faith and faith only. Attending Mass frequently during his forty day journey, he confesses to feeling almost intimidated by some of the iconography of Roman Catholic worship; however the respectful tone of the curious observer is maintained as he keeps his heart’s door wide open, commenting that “somehow on Camino these fine divisions evaporate”.

It wouldn’t be accurate, though, to see the adventure as exclusively religious; early on, David declares his intention “to expand my mind and experience [and] to walk across Spain”. His awareness of God doesn’t preclude drinking beer and watching football, or indulging his affection for seafood. The sense of travel is extended by the use of local linguistic forms, moving from French to Spanish to Galician as the pilgrimage progresses, and the tale is enhanced by the inclusion of well over a hundred photographs. This isn’t tourist Spain, and the writer is struck by the effects of the ongoing recession. The inseparability of the spiritual and the everyday is summed up by David’s stated objective to “walk and declare the gospel”. His knowledge of his own limitations is neatly crystallised in the truism that one is often most influential when not trying to influence anyone.

Earth Under My Heel is not rose-tinted convenience food for the soul. What emerges is a hard-headed and practical theology, at times painfully aware of the marginalisation of faith in today’s world. There’s a sadness at the sparse attendance at an Easter Mass, accompanied by a gentle but implacable assertion of the uniqueness of Jesus, a view not unanimously shared by his fellow pilgrims. The book finishes with a clear-eyed evaluation of the journey, with the writer observing that “there is nothing magical about the Camino. It does not [in itself] solve anything”. Nevertheless, there’s “something unifying about the common experience on a single road which must be traversed”, and Earth Under My Heel is a fine evocation of the fellowship and insight to be found in an ancient metaphor of pilgrimage as life’s journey.

By Mary Howell writing in The Bulletin of the Confraternity of St. James

The book is beautifully written and produced and filled with colour photographs which give a real sense of life on the French Camino. The Captain tells of his pilgrimage with humour and the precision of a Swiss watch. Times of trains and the start and end of each day are recorded to the minute, a detail that is perhaps a habit he finds necessary for navigation. His list of what he found useful to take and do beforehand, plus sending the weight of his pack home or ahead by road, is simple but valuable; so too the advice to start slowly and work up to walking long days in order to avoid either injury or illness. In Captain Littlejohn B's case that included avoiding the mountain pass on his doctor's advice because of a heart complaint. There is a sense that he gains strength as he walks and understands why the Camino has claimed him since he was a child and first learned of it.
He has a calling, a Christian mission which comes in handy along the way. Many pilgrims walk for a reason, often to gain forgiveness or peace for themselves or a loved one, or to find themselves. The Captain walks to give of himself and to share his love of Christ with others. He is most convincing, although for my part, do not need or want to be convinced, having recently shed my Christian beliefs in the hope of replacing them with those of a different set. Muslim perhaps.
I enjoyed revisiting the place names and the account of early risers unable or unwilling to leave anyone else asleep, the need for solitude, sustenance, sunshine and smiles. I too have experienced the phenomenon of making firm friends in an instant, recognising a fellow traveller with whom spending time will be mutually pleasing and beneficial, and the urge to write of it afterwards.
There is a strong voice here and we learn a little of the Captain himself. He has been a sea captain, is a master mariner, is married with sons and his middle son Joe accompanied him part of the way. I would have liked to learn more of him. Perhaps for that one must read Water Under The Keel, Captain David Littlejohn Beveridge's other book.


EPILOGUE (From Earth Under My Heel
A year and more has come and gone since I walked across Spain on the Camino de Santiago. Time enough, I say, to reflect and place in context my experiences.

When I first resolved to make the journey I was intent on fulfilling a vague dream and aspiration from my youth.I was not seeking redemption, forgiveness, or the reconciliation of life problems. The first two were long since dealt with when I trusted forever in the saving power of the shed blood of Christ; the third is the common lot of mankind, and so we have all to struggle through as best we can, with or without faith.

There is nothing magical about the Camino de Santiago. It does not of itself, either by its length, rigour or the places it passes through solve anything in my view. What it does do, and this may well contain a mystical dimension, is to permit in very subtle ways, human beings to interact and share parts of their lives with candour and at a deeper level than they might ordinarily ever do. There is something unifying about the common experience of daily toil on a single road which must be traversed,sometimes in company, whether we like it or not. We are obliged to interact with one another and out of this we form bonds be they never so ephemeral and transient. We offer opinions; a sounding board, another point of view, and sometimes a word in season; a word which actually helps a fellow pilgrim.

It took about ten days for me to realise, quite suddenly, having been asked many times why I was on the Way of St.James, that I might have something to give rather than to receive. After all I find it easy to talk to to people and the fact that I look old and have a "lived in" face, may well cause folk to think I have some experience to pass on. From that moment on my pilgrimage became much more valuable to me and endowed the enterprise with a sense of purpose it had not hitherto possessed. I eagerly looked forward each day to the encounters that might lie ahead and the opportunities I might be afforded to tell others about Jesus. I have to say this altered perspective not only filled my pilgrimage with new purpose but continues to this day. I have been changed and enriched. That is not all, I became aware, that I have been, all my life, less than tolerant of my fellow human beings. That facet of my character been altered, I think for the better. There is nothing like a spell of life in the albergues of the camino not only to highlight the merits of our accompanying life-travellers, but also to school us in the art of "live and let live".

Each day since returning home I have remembered the Camino de Santiago. I remember long, bone weary days, strong wind, driving rain, hot sun, the joy of day's end and the fellowship of good companions. It haunts my mind and inspires my art, and it calls to me irresistibly, so that soon, if I am spared, I will be a pilgrim again.